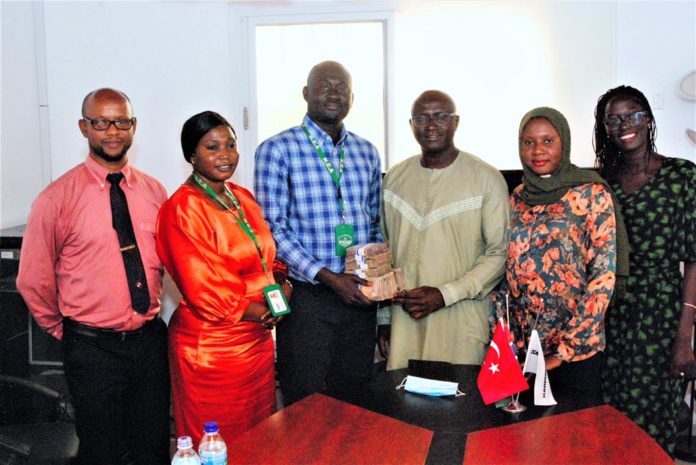 The day is observed on the third Saturday in September to increase public awareness about the accumulation and negative impacts of litter in oceans, on coastlines and on beaches. It was first observed in 1986.

Speaking during the presentation ceremony at the Karpowership head office off Kairaba Avenue in Fajara yesterday, country manager Yankuba Mamburay recalled that it was the third time in as many years that his company has made donations to the NEA in marking the day. Karpowership has also assisted NEA in celebrating World Environment Day annually. 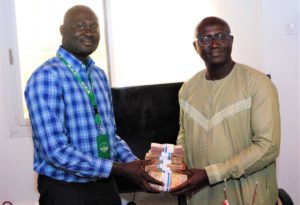 He said since his company generates its electricity on floating powerships located in marine environment, it is particularly sensitive to environmental issues and that is why it does not hesitate to assist NEA in activities geared towards environmental protection and sensitisation.

Mr Mamburay said since his company started operations in The Gambia on 2nd May 2018, it has lived up to its contractual obligation to supply 30MW of power to Nawec thereby stabilising the electricity supply in the Greater Banjul Area.  He disclosed that Karpowership now operates in many countries in the sub-region including Senegal, Guinea, Guinea-Bissau, Sierra Leone and Ghana.

He disclosed that when the initial two-years of the contract expired, the government of The Gambia extended it by another two years.

Manager Mamburay thanked his principals in Turkey for their prompt and positive considerations of proposals for help.

In receiving the cash, NEA director of inter-sectoral services, Njaga Touray, lauded Karpowership for being a supportive partner of his agency. He testified to the significance of the intervention of Karpowership in stabilising the electricity situation in the country noting that prolonged blackouts were the order of the day before.

He also commended Karpowership for implementing safe environmental safeguards which prevented any major environmental damages or incidents in its work.

Director Touray noted that protecting the environment should be everybody’s business as any blowback owing to its destruction will affect all.

He said this year, 18th September was designated as International Coastal Clean-Up Day but it could not be observed on the day because of “logistical constraints”.  However, Karpowership’s intervention has made the observance of the day possible.

Lamin Komma, programme manager and head of coastal and marine environment at the NEA disclosed that the offshore Bijol Islands near Tanji will be the centre of activities in marking this year’s coastal clean-up day.

He said the islands are important nesting and brooding sites for migratory birds from Europe and for emblematic species like marine turtles.

He explained that erosion, climate-changed induced rising sea levels, illegal fishing and pollution in the form of thrash are endangering the birds and turtles that populate the sensitive ecological reserve. “The birds are trapped in [disused] nets and other thrash and they are left to starve and perish,” he lamented.

The presentation ceremony was chaired by Sheriff Bojang, a local media partner of Karpowership in The Gambia and was attended by Ms Fatou Baldeh and Mam Marie Njai, senior programme assistants at the NEA.

International Coastal Clean-Up Day was established by the Ocean Conservancy, an organisation that works to help protect the ocean from the challenges it faces every year.

Share
Facebook
Twitter
WhatsApp
Linkedin
Viber
Previous article‘Back way’ to Spain: Over 140 migrants saved from boats on way to Canary Islands
Next article‘You did not vote for Barrow in 2016’: UDP leader accuses Sarahules of trying to make NPP and President Barrow Sarahule ‘property’ when they never voted for the president in 2016