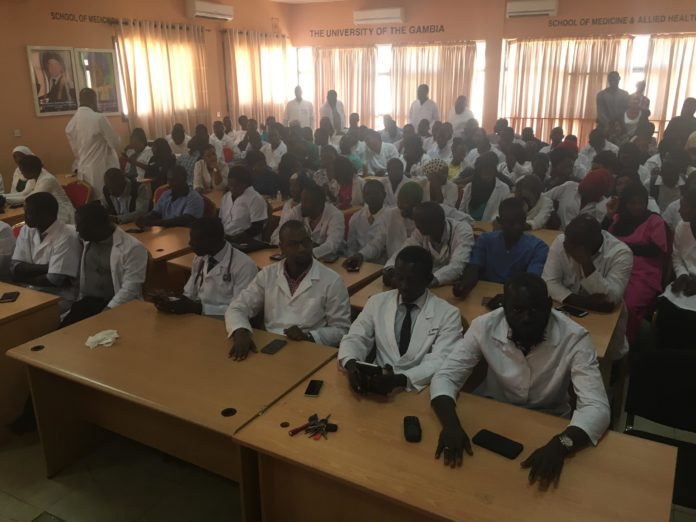 The practitioners on Tuesday gave Minister Saffie Lowe Ceesay 48 hours to resign over reported comments she made, alleging young doctors of holding back efforts in developing the health sector.

The Association of Resident Doctors-The Gambia (GARD) on Tuesday demanded for the resignation of the Minister of Health and Social Welfare, Saffie Lowe Ceesay within 48 hours.

This is in relation to a publication made by the Standard Newspaper captioned ‘Corruption hindering health sector’ published on February 28, 2018.

The paper reported that the minister revealed that efforts in developing The Gambia’s health sector are held back by corrupt and unpatriotic doctors.

“When you talk about corruption in the health system we all know how it is…these young doctors that will just go and practice pharmaceutics, some of them have opened their own pharmacies which the resources that we have. I am very sure of what I am saying because I was the PS,” she was quoted by the paper during a press conference.

GARD is also demanding that the Minister retracts her statement and apologize to the entire Medical and Health fraternity. The Association said if the demands are not met, they will resort to a sit down strike.

GARD is a representative body of all Resident Doctors with a current membership of 191 countrywide.

Information Minister Demba A. Jawo, has said that the Health Minister Saffie Lowe Ceesay has clarified that the statements attributed to her in recent newspaper reports were not accurate.

Jawo, who also doubles as the Government’s Spokesperson said this during his quarterly press conference on Wednesday at the ministry’s hall. Minister Jawo said: “She [Health Minister] however confirmed saying at the press conference organized by the WACS that the Health Ministry is facing a pilfering of Medical items that include drugs and that it is her responsibility to seek measures to address the access system so that such items do not find their way to private pharmacies and other private health facilities.

“The Health Minister has however expressed understanding of the quick reaction of the medical profession and would like to reiterate that she never attributed the pilfering to the medical doctors,” the Communication Minister told the press.

Dr. Neneh Bah the Vice President of GARD said the 48 hours ultimatum that was given to the Health Minister Saffie Lowe Ceesay to resign has elapsed.

The second of the strike will mean shutting down the entire health system. As a result, doctors will not be available in the health facilities to attend to patients.

The unhappy doctors, under the banner of GARD, accused the Minister and for Permanent Secretary under Jammeh of being incompetent and unfit to run the Ministry.

“There is a significant increase in non-communicable diseases among Gambians, for which there are currently no specialists, diagnostic equipment, treatment guidelines, or medicines to diagnose and treat these conditions,” Dr. Ebrima Bah, President of GUARD said in a statement announcing the start of the strike on Thursday at the EFSTH in Banjul.

Medical doctors, they said, work under very unsafe conditions in which they are constantly exposed to infectious agents without proper protective wear leading to health risks to themselves and to patients they care for.

”In one year plus, the Ministry has been unable to clearly articulate a vision in how to go about transforming the health system. This was clearly manifested in the 2018 Budget speech in which we saw no tangible short or long term plans, such as a plan to provide universal health coverage for our relatively small population of 2 million people,” Dr. Ebrima Bah, GARD President remarked.