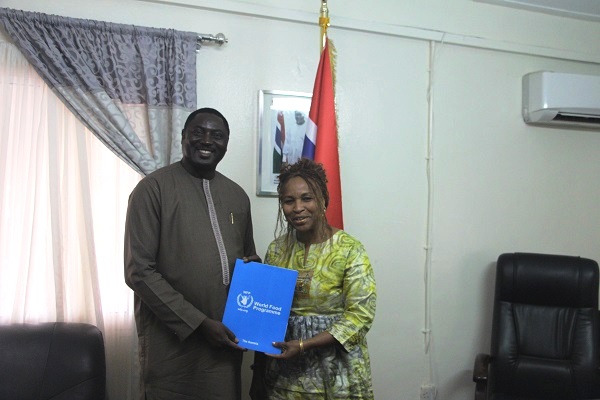 Receiving the Letters, Foreign Minister Tangara underscored the commitment of The Gambia Government to the relations with WFP, assuring the new Country Director of Government’s continuous readiness to support the good work of WFP in The Gambia. Mrs. Ndoho was accompanied to the Foreign Ministry by WFP’s Programme Policy Officer, Mrs. Anta Kah Janneh.

Meanwhile, the Honourable Minister also on the same day, received the  Spanish Deputy Director General for Sub-Saharan Africa, Mr. Alberto Cerezo, who spoke about Spain’s determination to support The Gambia in its democratisation process. He expressed delight at the fraternal ties of cooperation between The Gambia and Spain and expressed hope that the two countries  would continue to explore new, robust ways of strengthening this good cooperation involving the two countries.

Other issues discussed include migration, in particular the fight that must intensify against criminal networks involved in the trafficking of humans, cooperation in the security. The top Spanish Diplomat also presented his country’s candidature as a Non-Permanent Member of the Security Council of the United Nations for the period 2031 -2032.

Next to be received by Honourable Dr. Tangara was the Ambassador of the People’s Republic of China to The Gambia, His Excellency Zhang Jiming. The two sides primarily discussed preparations for The Gambia’s participation in the China – Africa Beijing Summit scheduled to take place on 3rd and 4th September 2018. The high convergence is expected to be attended by His Excellency, President Adama Barrow.

Issued by: Communication Unit of the Ministry of Foreign Affairs, International Cooperation and Gambians Abroad