Essa Faal throws his hat into the “crowded”ring! 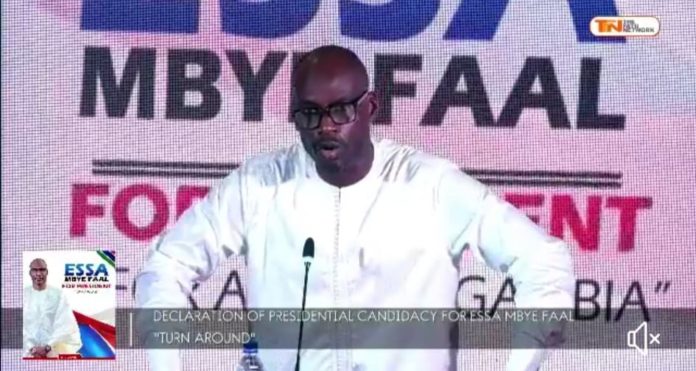 For months, rumours have been swirling around that the TRRC Lead Counsel, Essa Faal, will join the political fray, but the internationally acclaimed lawyer kept mute about it. In an appearance on Fatu Network’s For The People By The People Show, he was questioned whether he would contest the presidential election; Mr. Faal cunningly dodged the question retorting that only a lawyer would ask a Yes or No question.

Well, on Friday, Mr. Faal decided, in a fanfare, to break his long silence declaring his long-awaited decision to throw his hat into the ring.

Counsel Faal, now a presidential aspirant, has split public opinion in the Gambia since reports have emerged that he was eyeing the highest office, with some critics labelling him as an elitist and an opportunist who took advantage of his fame at TRRC to seek the presidency, even though the TRRC has not yet submitted its final report. On the other hand, his avid supporters hold a different opinion, insisting that Mr. Faal is the right person to take the country out of its woes and predicaments through his vast experience and undiluted love for the country. His defenders refer to his track record as an accomplished civil servant and an acclaimed international lawyer involved in high-profile prosecutions at the International Criminal Court (ICC).

Addressing the criticism levelled him that he took advantage of his public popularity stemming from his rigorous and robust line of questioning his witnesses before TRRC, Faal brushed aside the notion but was quick to add that he is the right person to seek justice for the victims, bring Jammeh to book and fully implement the recommendations to be made by TRRC.

Meanwhile, Mr. Faal confidently touted his credentials which make him stand out from an already crowded political arena, stating that he is a person who registers success in everything he does. He went as far as unreservedly saying: “I am the best to lead the country.”

Though he is yet to launch is a political manifesto, Mr. Faal told his keenly attentive audience that his foremost priority would be to unite a deeply polarized country.

The elections are three months away, so it remains to be seen how Mr. Faal will fare in an uncharted territory though he sounded very confident that the people will be surprised come December 4.

For the moment, it’s hard to predict how the political landscape will ultimately shape up with about 20 political parties and a handful of independent candidates, all eyeing the 1 Marine Parade.