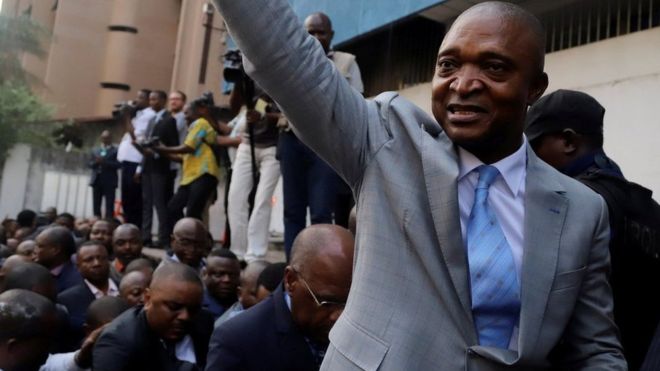 The question is whether Mr Shadary can convert that into a victory in Sunday’s presidential election.

The former deputy premier and interior minister is said by many to have earned the nickname “back-to-back” for his role in putting down a succession of opposition protests in 2017.

The crackdown, which turned deadly, led to him being sanctioned by the European Union.

But his supporters say the name is a reference to his years as a model student at DR Congo’s University of Lubumbashi, from where he graduated with five distinctions in 1987.

Mr Shadary’s loyalty to the president has been rewarded with the specially created post of permanent secretary in DR Congo’s main political party.

But many regard the regime stalwart and hardliner as a surprise candidate for the top job, with reports suggesting that even members of Mr Kabila’s inner circle were taken aback when Mr Shadary announced his leadership bid.

Some analysts warn that, if elected, Mr Shadary may merely keep the presidential seat warm while Mr Kabila, expected to step down after 17 years, plots a comeback.

The president has not ruled out standing again in 2023, adding “there is still a long journey ahead” and he will remain in politics after the poll.

Born in 1960 in Kasongo in eastern DR Congo, Mr Shadary studied at the University of Lubumbashi’s political sciences department before entering public life in the 1990s.

He was elected deputy governor of his native Maniema province in 1997 and a year later became governor of the region, from where Mr Kabila’s mother also hails.

“I don’t think he ever dreamed of becoming president of DR Congo,” Prof Alphonse Maindo of the University of Kisangani told the BBC.

“He is not someone who is seen as having charisma, or able to rally people around him.”

Mr Shadary’s peers gave him another nickname, “make-it-happen”, when in 2018 he successfully led negotiations to have electoral reforms passed in parliament despite spirited opposition.

Mr Shadary rose to national political prominence in December 2016 when he was appointed as one of three deputy prime ministers, as well as minister of internal security.

President Kabila’s time in office should have ended that same month, but no elections were held despite it being a constitutional requirement, and the polls were delayed repeatedly.

In February 2018, Mr Shadary was named the People’s Party for Reconstruction and Democracy (PPRD) permanent secretary, elevating him to the second-most powerful position in the party he co-founded in 2002. The PPRD is the main group in the ruling Alliance for the Presidential Majority.

It was a role created as part of internal party reforms in preparation for the upcoming election, and widely regarded as a reward from the president for his loyalty.

“Mr Shadary was pretty much unknown before he was appointed as successor to Joseph Kabila,” Prof Filip Reyntjens of Belgium’s University of Antwerp told the BBC.

“If you had asked people for a list of 10 possible candidates he would not have even got a mention.”

He says there is a possibility that “a weaker personality” at DR Congo’s helm could allow the outgoing president to exercise power from the sidelines.

“That would make sense from Mr Kabila’s point of view.”

Prior to his election last year, Mr Lourenco had been viewed by many as a puppet of long-serving President Jose Eduardo dos Santos. But he has since turned on the former president and his family.

But what is different, says Prof Maindo, is that Mr Shadary is “without large funds of his own” and therefore “dependent on Mr Kabila’s finances”.

Aside from his loyalty to the president, analysts also credit Mr Shadary’s rise through the ranks to his hardline approach.

As interior minister he oversaw a brutal crackdown on anti-Kabila protests across the country in 2017. During that time, dozens of civilians were killed by government forces.

‘Parody of an election’

Rights groups have also accused Mr Shadary of spearheading a brutal military crackdown in the Kasai region, where long-simmering resentment exploded into rebellion in 2016.

The EU has renewed existing travel bans and financial sanctions on Mr Shadary and 13 other senior officials for election delays and violently suppressing anti-government protests in 2017.

International campaign group Human Rights Watch says Sunday’s poll risks being a “parody of an election” in which popular opposition candidates have been “arbitrarily excluded” and resources controlled so as to allow Mr Shadary “an unfair advantage”.

The exclusion of two heavyweight opposition contenders, Jean-Pierre Bemba and Moise Katumbi, may have boosted his chances.

Mr Shadary has also been helped by the fact that the opposition vote may be split between two prominent candidates, Felix Tshisekedi and Martin Fayulu.

The test, if elected on Sunday, will be whether he can emerge from the shadow of Mr Kabila.