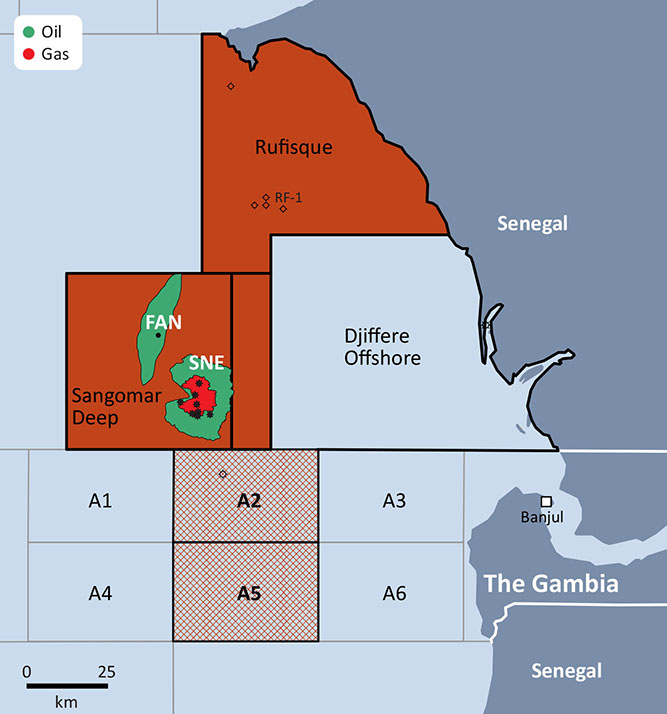 The Samo-1 well offshore The Gambia has been drilled to a total depth of 3240m and wireline logging is nearing completion. The well operations to date have been conducted safely, efficiently, ahead of schedule and within budget.

Interpretation of the wireline logs so far indicates that the main target horizons are water-bearing. Oil shows were encountered at several levels indicating that the area has access to an active hydrocarbon charge system. The well also encountered excellent reservoir and seal facies, indicating that all the key components for a successful trap are present. As the first offshore well in forty years and the first modern well, the data that has been collected at Samo-1 and the ongoing interpretation will be critical to unlocking the hydrocarbon potential in the area. The well will be plugged and abandoned, consistent with the plan for this exploration well.

The Government of The Gambia confirmed a six-month extension to the current licence to end June 2019 to allow for evaluation of the Samo-1 well results.

Cath Norman FAR managing director said: “The result in the Samo-1 well is not in line with our pre-drill expectations, however it is providing an abundance of new subsurface information that will help us understand the geological play along the shelf edge –an area which remains grossly underexplored. The FAR team has identified a portfolio of prospects and leads in the A2 and A5 permits and the data from Samo-1 will be used to further mature and derisk these for future drilling. Drilling the first well offshore Gambia for 40 years has drawn attention to this well and the result is a reminder of the risks we face in our business.

We are pleased to receive a six-month extension to the licence, which will allow the JV to formulate and move on with plans to drill next year, after integrating the results from Samo-1 into the regional geological model.