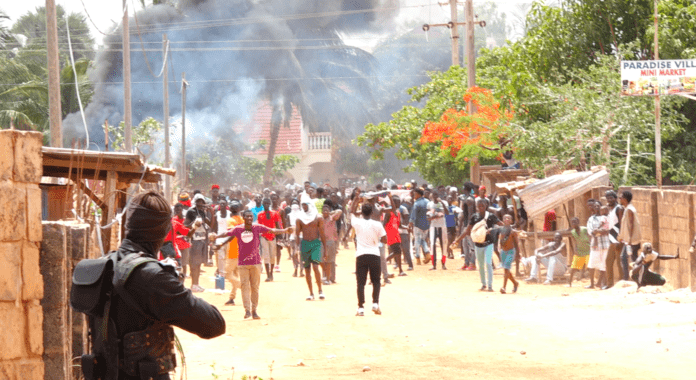 The demonstrations that swept the country’s two largest cities last Wednesday underpin a deep-seated crisis and mounting problems that continue to face our nation, as the unrest clearly reflects a profound sense of frustration and despair among the Gambian youth, barely three years after the former regime was booted out in the presidential election.

The Brikama protest was meant to voice out public dissatisfaction with the abysmal performance of the Brikama Area Council vis a vis its KMC and Banjul counterparts, while the Serrekunda riots were spontaneous, in reaction to the death of Ousman Darboe, a Sierra Leonean vendor, allegedly due to police brutality.

Notwithstanding, the furious and indignant youngsters who made up the majority of protesters were visibly enraged and incensed by lack of opportunity in the country as far as the youth are concerned. During his encounter with the youth to calm them down, Deputy CDS Yankuba Drammeh was challenged by largely young men who bitterly lamented the lack of job opportunities for the youth coupled with police brutality. The stark reality is that the majority of the country’s youth that greeted the new government with euphorias and enthusiasm in its early days following two decades of brutal dictatorship is disappointed with the current state of affairs and see no glimmer of hope in the horizon.

The heavy-handedness with which the security forces dealt with the riots was a brutal reminder of the former regime’s tactic of crushing any form of dissent and nipping it in the bud. Trigger-happy plainclothes security men were seen roaming the streets in pursuit of the protesters. They were treated as criminals rather than being citizens with legitimate demands. Observers have sounded the alarm that government’s overreaction and disproportionate use of force against unarmed civilians might be a precursor to the way it will handle the well-anticipated demonstration in December when the 3 years Jotna group is expected to demand the resignation of the President in line with the agreement reached by the Coalition in 2016.

The Barrow Government must deal with the root causes of the rising crime rate in the country by effectively engaging with the youth through all the concerned sectors of the Government. The President ought to disband all the politically oriented fans club and inject resources into the National Youth Council to create meaningful programs for youth development and empowerment.

The Government’s inaction or hands-off approach is untenable; it needs to act swiftly and hold the bull by the horn before the time-bomb goes off.