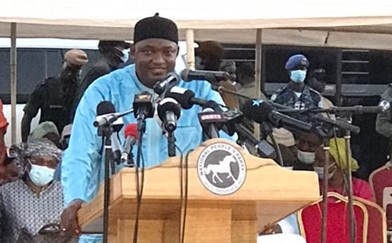 The Gambian President who doubles as the leader of the National People’s Party Adama Barrow has promised to construct more roads and hospitals across the country.

“I will construct over 1600-kilometre roads across the country and build hospitals to strengthen the health sector if re-elected on 4th December 2021,” Barrow said.

The head of state was speaking during his meetings in Bwiam, Somita and Giboroh last night.

The Gambian president said his government is committed to developing and unifying The Gambian people.

Responding to concerns raised by various speakers President Barrow assured voters that he will continue to work for the country. Barrow called on Gambians to embrace unity and desist from those things that divide the nation and fester tribalism.

The NPP leader called on his supporters to remain calm while awaiting victory in the race to state house, noting that Gambians should understand he is the president, and his time will end and will someday be history.

Honourable Sunkary Badjie is a National Assembly Member for Foni Berefet he called on people to rally behind president Barrow.

Imam Alhagie Baba Ceesay of Bwiam called on citizens to embrace peace, noting that there cannot be any meaningful development without peace. He told the gathering that politics is not about attacking one another.

He, however, expressed concerns over the challenge of easy access to education.

President Barrow’s work was recommended by various speakers on different campaign platforms, most of them saying that the country has made progress within the five years of his mandate.

President Barrow is accompanied by a delegation of senior government officials, party leaders and independent candidates who pledged their support describing Barrow as the right candidate for the top job.

Press Release: Truth and Reconciliation report must lead to justice and reparations for victims

Ministry of health announces relocation of accident and emergency unit of...

‘Who are you?’: Furious Mamma Kandeh says no one has right...