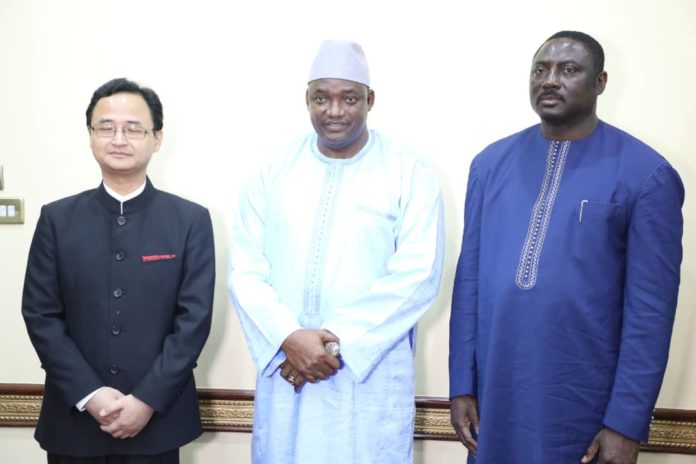 His Excellency, President Adama Barrow on Tuesday received in audience theChinese Ambassador to The Gambia, His Excellency, Zhang Jiming, who was at the presidency to bid farewell as he comes to the end of his diplomatic tour of duty in The Gambia.

Speaking to the State House press corps after the closed-door meeting, the Chinese diplomat said: “it is a sad moment with mixed feelings. I and President Barrow have reviewed what had happened in the past two years of our bilateral relations and we were satisfied with the achievements and progress of our levels of cooperation and relations”.

He lauded the support given by President Adama Barrow to the China-Gambia relations and assured him and the government of The Gambia that the Chinese side attaches great importance to the ties.

“The Chinese side is also very pleased with the progress in the past two years of the bilateral relationship. We are very confident, on the basis of the One-China principle and also on the basis of mutual respect, benefit, andequality, that our friendship will grow from strength to strength,” hecharged.

Ambassador Jiming said he is “so honored” to be the first Chinese diplomat to serve in The Gambia since the assumption of bilateral ties, adding that he had a momentoustwo and a half years in The Gambia.

“It is because both of us worked on the same goal that we are now where we are. The experience in the past two years gives me confidence, that our relationship has not only a tradition and historybut also a solid foundation,” he said, expressing hopes that his successor will build on this so that a  lot more can be achieved.