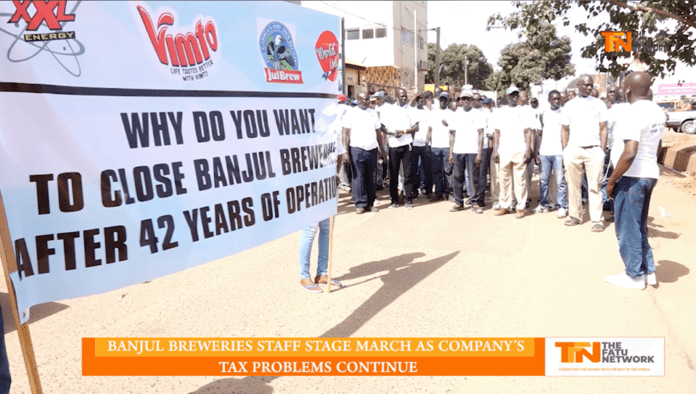 Staff of Banjul Breweries on Thursday took to the street to bring in home on the Gambian authorities their growing fears and apprehension over prospects of losing their jobs.

The staff believe that if the government insists on the 75% hike in tax levied on the company, many of them risk losing their livelihoods.

Negotiations between the company and government have stalled and the company staff are worried that sooner rather than later, many of them would be sent packing if the government did not reverse its decision of not revisiting the tax increase.

Consequently, they converged on the busy Westfield intersection in Serekunda to take part in a march that was aimed at drawing the attention of government and the general public to prospects of huge job loss at the brewery.

“Our sister company has already closed. Presently, they are dismantling their materials in Niger. That is facing us, too. So, we have fears of our people too because they [Banjul Breweries] have laid off 18 staff already. So, we came out today to showcase our concerns to the Gambian people so that they can know what is happening within The Gambia. I think government should advocate increasing employment not reducing it. If Banjul Breweries closes down, so many people will suffer. Even government will lose revenue,” Alhagie Ceesay, one of the organisers of the march, told reporters.

He added:” We need the tax to come down because it is too high for us. 50 years [tax] was 10% and within 3 years, they [government] increased it to 65% making it 75%. If you observe, Banjul Breweries has so far the highest alcoholic tax in the world.”

Asked as to the state of negotiations between the brewery and government, Mr Ceesay lamented: “Even the negotiation is broken because we don’t have information from neither trade nor finance. We also wrote to the National Assembly. We wrote to all these institutions about the situation but nothing has come out of it.National Assembly have been sitting from Monday to date but we’ve not heard anything about our issue.”

Atleast 150 members of staff were believed to have taken part in Thursday’s march.