As War of Words Continue: Barrow Promises to Send Darboe on Retirement 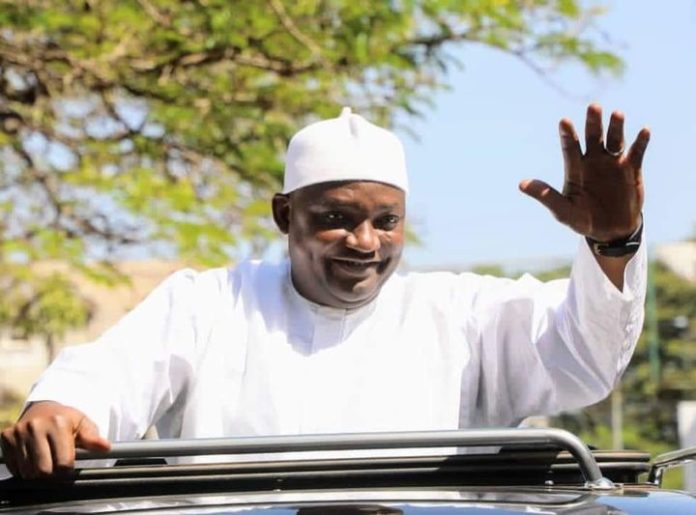 President Adama Barrow has promised to send opposition leader and close contender for the presidency Ousainu Darboe on retirement when he would have won the December 4th, 2021, elections.

According to Barrow his ‘father’ (Darboe) has failed to recognise his several developmental projects rolled out across the country.

“My father [Ousainu Darboe] is saying all these developments I brought to Basse he was the one who signed them in China, forgetting that I was the one who released him from prison, appointed him Minister of Foreign Affairs and later Vice President. But all these will end after December because I will send him into retirement,” President Barrow said.

He was addressing a meeting in Koina as he continues his campaign tour across the country. He described his opponents who are reluctant to acknowledge what he described as ‘tremendous achievements’ in the past five years, as hypocrites

“I built markets, bridges, roads, schools and provided tractors for farmers. Why are they refusing to acknowledge these things? But this is all hypocrisy because no matter how much you hate someone, you should acknowledge his good deeds,” Barrow said.

Adding that the people of Basse have shown him that he hails from there (Basse) whilst sending a strong signal to the opposition that the area is a no-go area for them.

Meanwhile, the country’s Human Rights Commission (NHRC) has in a press statement noted that it is extremely concerned about the statements uttered by President Adama Barrow at his recent political campaign in Farafenni when he seemingly took pride in the use of tear gas by the paramilitary unit of the Gambia Police Force to forceful dispersal a protest of the Three Years Jotna movement.

Similarly, the commission said it is equally perturbed by the remarks of Mr Ousainou Darbe, the UDP leader and presidential aspirant, to the President’s reference to him as the “CEO” of the 3 Year Jotna Movement by threatening to “ destroy” the President

The commission says that such statements by political leaders have the potential to threaten the peace and stability of the country, as well as instigate violation of the rights to freedom of expression, association, peaceful assembly, and political participation as guaranteed by the 1997 Constitution of The Republic of The Gambia and other regional and international human rights instruments ratified by The Gambia.

The Commission reminded all political leaders, their supporters and in particular the presidential aspirants, about the IEC Code on Election Campaign Ethics Order as well as their commitments under the Jangjanbureh Peace Accord which they have all signed and are obligated to abide by in both letter and spirit. Urging all the presidential candidates to make their campaigns issue-based and preach peaceful-co-existence, mutual respect and tolerance of diversity as embodied in the country’s National Anthem.