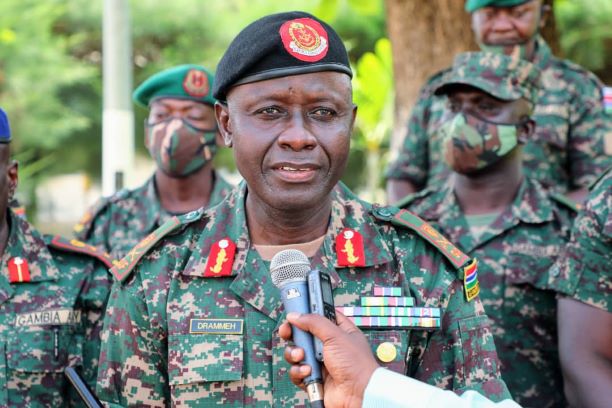 The military on Tuesday evening issued a statement dismissing as inaccurate reports of a coup plot involving soldiers from a particular tribe.

The army’s statement reads in full:

The Gambia Armed Forces (GAF) High Command wishes to draw the attention of the general public and online news followers regarding a disturbing headline of a story published by the Freedom newspaper online that reads: “FIVE JOLLA ARMY OFFICERS CONFRONT CDS DRAMMEH…” This story was published on 4th October 2021. A further publication on 5th October 2021 followed suit, which reads: “…THE PURPORTED MILITARY INTELLIGENCE REPORT…” Following these stories, an audio was uploaded through the same medium expressing similar views and sentiments on the two stories and calling out some names at least without the mention of tribe. These publications in total present a deep concern to the Gambian populace whose hope for the healing of the nation is challenged constantly by the bane of tribal sentiments and political bigotry.

It is instructive to state that the armed forces of any nation is the bastion of unity and the last line of defence and GAF is by no means an exception to this reality. Accordingly, GAF strives and commits herself to the preservation of peace and security of our motherland in line with her prescribed mandate as contained in the 1997 Constitution (As Amended). In order to achieve this lofty ideal and aspiration, it is important to highlight that GAF does not have any policy that portrays any of its personnel along ethnic, religious, colour or creed lines. Consequently, making such a disturbing and misleading reference to certain members of the Armed Forces with a particular ethic nomenclature is not only divisive but also callous and dangerous to say the least with huge security ramifications.

On genesis of the meeting (so-called confrontation) of the adversely mentioned officers with the Chief of Defence Staff (CDS), as described by the online publication, is not only misleading but also grossly inaccurate. In the interest of highlighting military culture and its ethos, as it exists, the officers mentioned first and foremost shared their concerns with the Deputy Chief of Defence Staff (DCDS) on the purported report. Thereafter, the DCDS contacted the CDS for an audience with him together with the concerned officers. This request was granted on the basis of transparency. It was during this meeting that the CDS indicated that it was the first time that he heard about the purported report containing the names of the deeply concerned officers. It is therefore imperative to indicate that there exists no such thing in the Armed Forces as “confrontation” between senior and junior officers. Any senior officer can call the attention of his junior and a junior officer may also respectfully raise concerns or make a case to a senior in line with Service tenets and protocols i.e ‘chain of command’ approach. Such occurrences therefore can only be described as normal in the Armed Forces.

It was furthermore indicated to them that no such report has been tendered to the GAF High Command (Office of the CDS) nor has he (CDS) been briefed on such purported report and, the concerned officers have been assured to go about their normal businesses. The High Command took cognizance of the past where people were arrested, incarcerated and even dismissed just on unproven allegations. Therefore, without any substantive proof, the officers have been reassured that gone are the days when people could just be alleged and arrested arbitrarily.

As alleged by the online stories on the involvement of the GAF Military Intelligence unit, nothing in fact and in substance could be further from the assertion being accurate. It is pertinent to mention that like any other directorate at the Defence Headquarters, there is no barrier between the Director of Military Intelligence and Security and the CDS and as such, dealings between the two does not go through a third party intervention. Therefore, the Director of Military Intelligence is obliged to share with Command on timely basis; all issues that boarder on National Security, which is consistent with his/her Terms of Reference. Hence, whatever document originates from that unit goes directly to the Office of the CDS; a process of which this purported document never passed through from all indications.

Given the gravity of the allegations, the questions that any genuine and rational person would therefore ask are why the purported document did not bear a letterhead and signature, which is inconsistent with official GAF document configurations. One could further be tempted to ask, why was the purported document never sent to the office of the CDS, as it should have been if the GAF Intelligence unit had written it? Therefore, the only sound deduction could be that the purported report online is just ”hearsay” backed by no factual evidence. Base on these questions raised, the GAF Intelligence unit could not be the ones responsible for such an evidence devoid report.

Given these narratives for the purpose of clarity and to allay the fears of the officers concerned and the public at large, if anyone especially the originator(s) of the purported report; be it an individual or groups of individuals, should come forward with substantive evidence and present it, be assured that the right course of action (full blown investigation) will be carried out in line with established military procedures. Until it is proven beyond reasonable doubt with substantive facts given the gravity of the allegation, the report is considered hearsay. It must be emphasized that the true spirit of the GAF does not thrive on tribal cleavages nor encourage discrimination base on sex, tribe or religion etc. and condemns therefore, without reservation the way the report has been angled online.

Additionally, it has been observed of recent, the ascription of appointments within the GAF to tribe, region and other deplorable assertions from some quarters in the public domain. Therefore, it is pertinent to clarify that postings and appointments in the military are strictly based on merits and nothing else. The raison d’être for this is to ensure sound service delivery output in line with the ideals of the Security Sector Reform, which is solely for the betterment of the Armed and Security services of the Gambia as it obtained in many other countries.

It is essential to indicate that GAF spots officers and test them with new challenges every now and then until the individual officer’s strengths are realized in a certain area. In the recent past (between 2017 to date), officers have been moved in single instances as well as en-mass from one appointment to the other. Such routine rotations and reshufflings would always continue until the right people are in the right places. It would therefore be tremendously misleading to ascribe appointments in the GAF on tribal leanings but rather on effectiveness.

With regards to the purging of some officers due to their ethnic inclinations as alleged and contained in the Freedom newspaper publication of 5th October 2021, the general public is hereby informed that such does not exist in terms of context and fact. Furthermore, for clarity sake and fact checking, those claiming that appointment in GAF is tribally inclined are encouraged to further investigate or contact the armed forces in person for details of key appointment holders and their ethnicities within both the Defence Headquarters and the Joint Services Headquarters respectively. Our doors are open for clarification and we are more than ready to provide you with undisputable facts.

To this end, GAF craves the indulgence of all law abiding citizens and fellow compatriots to distinctly insulate the GAF and her members from politics and help in the advancement of the apolitical commitment it has made so resolutely since the period of 2017 to date. Hence, persons with nefarious intent must avoid attempts to infiltrate the military through political means in advancement of agendas not commensurate with that of the lofty ideals of the GAF.