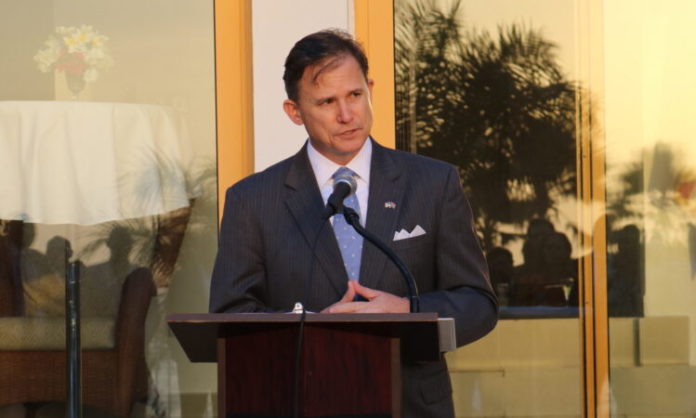 These past few weeks, The Gambia has been filled with the sights and sounds of the embrace of democracy. All around, people are discussing the presidential election, debating the issues, and questioning the candidates. Both elders and youth sport their preferred candidates’ colors and cheer them on at campaign appearances. And, at the U.S. Embassy, we couldn’t miss the noise of the crowds as they escorted their parties’ standard-bearers to the Election House to formally nominate their candidate in mid-November. It was deafening – but the energy, the sound of democracy, was infectious.

I can only imagine that all these sounds are music to Gambians’ ears. Such beautiful sounds were far more muted just five years ago when freedom of expression was stifled, and opposition leaders jailed. It took the courageous Gambian people to go to the polls and change the course of history, inspiring those who aspire for democracy around the world. The resolve of the Gambian people is what made what we see today possible.

Today, The Gambia is a different place, and the United States celebrates the transformation that is underway. We join with the Gambian people in dreaming big to envision a brighter future of democracy and prosperity. This is why we are now investing more than $50 million in programs to advance democracy and human rights, along with development programs that foster economic prosperity. In November, for example, the United States signed a $25 million Millennium Challenge Corporation agreement with the Gambian government to launch a threshold project focused on supporting Gambian-led initiatives to improve The Gambia’s energy and electricity sector.

So much positive change does not come about without resolve and intention. The positive energy comes from Gambians young and old who are overwhelmingly committed to civic engagement and peacefully participating in the democratic process. Earlier this year, I saw this myself as we traveled throughout the country and visited even the smallest villages where people were lined up, calmly, to register to vote. I talked to hundreds of people, including many women eager to be part of the process and make important choices for their families. And young people, so full of vigor, said that they were excited to make decisions that would impact their futures.

While some parties missed out on the opportunity presented by a live, televised presidential debate to take their message to the Gambian people and demonstrate what clearly sets them apart from the other candidates, we applaud the candidates willing to do so through the Commission on Public Debates’ presidential debates. Gambian voters will only benefit from the opportunity to see those aspiring for the presidency answer a moderator’s questions, especially when submitted by citizens themselves.

As the vote draws near, we encourage all to continue the goodwill and peaceful competition of ideas we have seen thus far. We are confident that whether engaging in political discussions in person or on social media, the traditional Gambian cultural trait of treating others with dignity and respect – friend, family, or stranger –will be on display for all the world to learn from and admire.

We also take note that all the candidates have publicly committed to accepting the election results and the will of the Gambian voters, whether they win or lose, and are committed to working together to build a stronger Gambia. As I have said, the United States does not take sides in endorsing any candidate. Our top “candidate” is a peaceful continuation – and strengthening – of democracy. The will of the people, the active involvement of the Gambian people, is what must ultimately win.

On election day, our Embassy will be working in coordination with international partners and Gambian civil society organization to observe and support electoral processes across The Gambia. Our goal is to help ensure what we expect will be credible, free, and transparent election procedures.

Since this is my first Gambian presidential election, I am eager to watch as Gambians drop their marbles in the drums –a somewhat different process than in the United States. I can’t wait to hear those marbles drop, which is yet another encouraging sound of democracy in action. And most of all, it is the sound of #PeacefulVoteSmilingCoast.

The writer, R. Carl Paschall, is the Ambassador of the United States to the Republic of The Gambia.