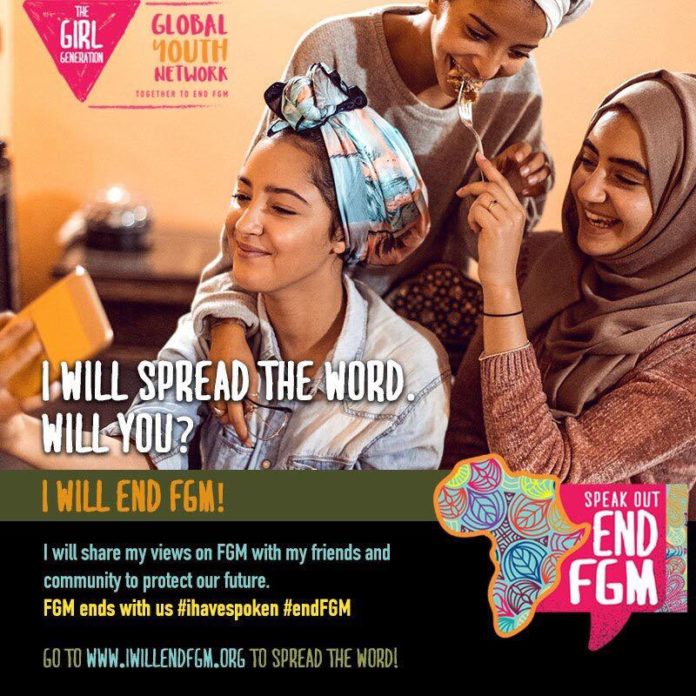 African youth today issued their rallying call to end Female Genital Mutilation (FGM) in a generation by sparking one million conversations that break the silence that allows the practice to prevail.

As the largest African generation ever, the young people from all over the world have been speaking out, pledging to make theirs the generation that ends FGM. As part of this, they are calling on their peers and parents as well as leaders from their communities, religion and politics to join them in talking about the issue.

Aware that issues that aren’t spoken about prevail the longest, the young activists hope to spark a million conversations on FGM, whether these be people speaking out against it or survivors sharing their experiences.

To achieve this, the young Africans are posting videos on social media to raise awareness of the issue and inspiring others to show their support by also making a pledge to end FGM. The videos, which are on Twitter, Facebook and Instagram with the hashtags #Ihavespoken and #EndFGM, seek to break the silence that surrounds the issue. “FGM ends with us”, the activists say.

In 2010, a UNICEF study found that speaking out in the media and discussions in the community and at home played an important role in moving towards the abandonment of FGM in five African countries.

Learning lessons from UNICEF’s study, the young campaigners have concluded that the culture of silence around FGM allows it to prevail and people’s reluctance to speak about the violent practice means that laws alone won’t end it. This campaign hopes to powerfully break the cycle of silence, encouraging everyone to play a part by speaking out and taking action.

The campaign is being supported by The Girl Generation, the world’s largest Africa-led global collective of partners brought together by a shared vision that FGM can – and must – end in this generation. The Girl Generation is proud to support the African youth achieve their aim by:

“Today marks a momentous day in the global movement to end FGM. We’re so excited to watch this movement grow from the minds of young activists in Africa to a million voices all around the world.

“These young people are taking action by shattering the silence that surrounds FGM. By inviting and inspiring others to join the movement, they take a giant leap forward towards creating a world that is safer for our girls”.

“I am a survivor of female genital mutilation and am a living testimony of the harm it causes.

“However, I am using my story in a positive a way. I have made a pledge to my daughter that I will protect her with my heart and my soul and I will extend the same protection to all the girls in my family and community.

“That’s why I am working endlessly, tirelessly, to ensure that the right people are speaking out against FGM, changing mindsets and attitudes so that we will be able to end it in a generation.”

“Let’s teach our girls the good traditions without cutting them. The harm done is severe with lasting negative effects.

“This is why I use my voice and pen as a journalist to disseminate useful information on FGM.