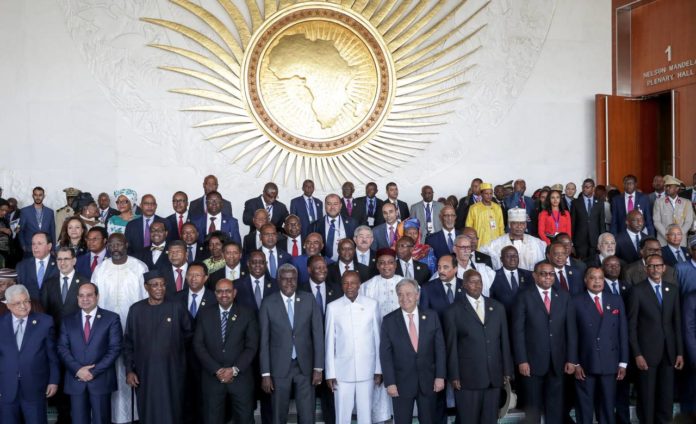 The theme for this year’s Summit is ‘Winning the Fight against Corruption: A Sustainable Path to Africa’s Transformation’. This theme presents a unique opportunity to reflect on an address specific challenges related to the fight against corruption on the continent. The AU summit deliberate on a number of issues, including institutional reforms of the African Union, continental free trade and the state of peace and security on the African continent.” including the consideration of the report of the Executive Council, the Annual report of the Chairperson of the Commission for the period January to December 2017 and the report on the implementation of the Assembly Declarations including that on the Solemn Commitment on the Single African Air Transport Market (SAATM).

The PRC meeting was the first statutory meeting of the 30th Ordinary Session of the Summit of the AU, which was held from 22nd – 29th January 2018. The PRC meeting prepared the agenda of the AU Summit with appropriate recommendations for consideration by the Executive Council, which took place from 25th to 26th January 2018. The meeting brought together all the Ambassadors of the 55 African Union Member States based in Addis Ababa and other key AU officials.

In his opening remarks, the African Union Commission chairperson, Moussa Faki Mahamat told the delegates that this year’s summit will deliberate on mechanisms for combating corruption, as a means of transforming Africa. He further more highlighted on the efforts that are being taken by African states to fully finance the African Union as agreed in 2015, in addition to implementation of the Single African Sky.

According to a 2016 Corruption Watch report indicated that the most prevalent types of corruption reported in the continent over the past few years center on abuse of power, followed by bribery and then procurement corruption.

Within the framework of the 30th AU Summit, H.E Dr. Abou -Zeid Amani, Commissioner for Infrastructure and Energy, on Friday 26 January 2018, hold a press conference on the following issues launch of the Single African Air Transport Market, Status update on DotAfrica, Update on the Programme for Infrastructure Development in Africa (PIDA), Update on the Africa Renewable Energy Initiative (AREI), Operationalization of the Geothermal Risk Mitigation Facility (GRMF) and the Regional Geothermal Programme and Update on E-Governance.

In another development the Single African Air Transport (‘’SAATM’’) which was launch is one of the Flagship Projects of the African Union’s Agenda 2063. It will ensure that aviation plays a major role in connecting Africa in order to achieve social, economic and political integration and boost intra- Africa trade.  Travel and tourism is vital to the globalized economy. Aviation is a vital tool for development globally and has the potential to greatly transform and improve economic and social benefits across Africa.

On her part Amira Elfadil Mohammed, AU Commissioner for Social Affairs said the free movement of people will help reduce dangerous migration trends, mainly to Europe via the Mediterranean Sea. As the free movement of people will offer potential overseas migrants, particularly those taking dangerous routes, new options and thus help their pursuit for better life and employment across Africa.

She furthermore highlighted that nothing more than 80 percent of African migrants commit intra-Africa migration, she lamented that easing visa restrictions within the continent has the potential to further reduce the current 20 percent of migration to Europe and other parts of the world mainly via dangerous routes.

Commending the achievements of the Economic Community of West African States (ECOWAS) for the free movement of people, she also called on other African regions to take lessons from ECOWAS and create an integrated continent.

African leaders also committed to eliminating malaria by 2030, as articulated in the Continental development Agenda 2063. Malaria, a treatable and preventable disease, already costs the African continent’s economy US$ 12 billion per year in direct losses, and 1.3% of lost annual GDP growth, an earlier report by the RBM Partnership, Action and Investment to defeat Malaria, has shown.

According to the World Malaria Report 2017, progress across Africa has been uneven, putting at risk the tremendous progress to-date and African leaders’ collective ambition to end the disease. While some African countries have seen a greater than 20% increase in malaria cases and deaths since 2016, others are showing that beating malaria is possible.

Participants also heard that high-burden countries such as Nigeria and the Democratic Republic of the Congo (DRC), which account for 27% and 10% of the global malaria cases, respectively, also face significant gaps in financing their malaria efforts over the next three years. Nigeria faces a financial gap of US$ 1.4 billion, equivalent to 68% of the country’s needs, whereas DRC requires an additional US$ 536 million to fully implement its national malaria strategic plan. Alternatively, several African countries that have stepped up their efforts, such as Senegal and Madagascar, have achieved a greater than 20% decrease in malaria cases in 2016, according to the World Malaria Report 2017.

In June 2014, African Union Heads of State and Government adopted the Malabo Declaration on Accelerated Agricultural Growth and Transformation for shared Prosperity and improved Livelihoods. Among other commitments of the Declaration, the Assembly specifically committed to mutual accountability for results and actions by conducting a biennial review that involves tracking, monitoring and reporting on the implementation progress in achieving the provisions of the Malabo Declaration. The inaugural report and the Africa Agriculture Transformation Scorecard, tracking progress of the implementation of the Malabo Declaration, was presented to the Assembly. The Biennial Report and Africa Agriculture Transformation Scorecard comprise individual country performance scores on progress made for implementing goals set in the Malabo commitments.

The growing terrorism threat in Africa is a shared responsibility, requires the intensification of our efforts in a coordinated global approach. The transnational nature of terrorism knows no borders + no single state can fight it alone. Said Moussa Fakki Mahamat, the AU Chair.

H.E Paul Kagame in his inaugural speech in front of his peers as the new President of the Union for the next year. He is also supervising the AU Reforms on behalf of the Union. His personal commitment to this transformative agenda for the Continent remains key in making Africa great.