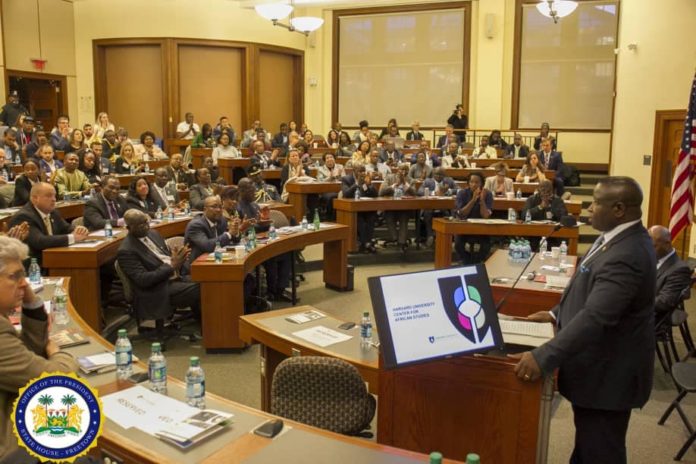 His Excellency President Julius Maada Bio has wooed academics and students at Harvard Law School during a forum on Sierra Leone organised by the Centre for African Studies, Harvard University.

Delivering his keynote address, a confident President Bio said that he has prioritised human capital development because that is the foundation for sustainable development.

President Bio also said that he was in Harvard University to seek partnership and collaboration through experience sharing, knowledge sharing and learning. Discussing the cost of his flagship programme, free quality education, he also said that “ignorance is more expensive than education”.

President Bio used the forum discussion which coincided with International Women’s Day to higlight some of his policies which have been targeted towards the protection and empowerment of women and girls in Sierra Leone. In the area of education, he spoke about grants-in aid for female students pursing sciences in tertiary institutions. A passionate President Bio also explained about the state of emergency on rape and sexual violence as part of series of measures to protect girls and women.

President Bio also highlighted his achievements in revenue mobilisation and control of expenditure to demonstrate his efficient economic management of the state. He spoke of his war against corruption and the commissions of inquiry to ensure democratic accountability to the people.

During the dialogue forum there were also expert presentations by academics in the following areas: Dr Paul Farmer presented on Healthcare Infrastructure and Healthcare Delivery; Professor Fernando Reimers presented on K-12 Education for a Global World; Professor Margaret McMillan presented on Economic Development in Sub-saharan Africa and Professor Raymond Atuguba presented on Law and Governance in Sierra Leone.